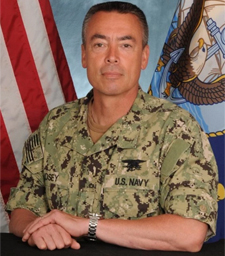 Brian Losey has spent his entire career—some 33 years—serving our country. In August 2016, he retired as Rear Admiral of the U.S. Navy where he led the Special Warfare Command.

Most people outside of the military do not often get to meet a Navy SEAL and learn what motivated them to seek that path, and how they endured the rigors of training and uncertainties of their missions. Cohen Veterans Bioscience (CVB) was keen to find out and recently spoke with Rear Admiral Losey, who will be a keynote speaker at the Cohen Veterans Care Summit taking place September 22 and 23, 2016 in Washington, DC.

CVB: What was life like for you growing up? What inspired you to join the military?

Rear Adm. Losey: I grew up in a military family so we moved around a lot while my Dad was in the Air Force. While he was doing his tours in Vietnam, my Mom and I lived in Japan. It was great exposure to a totally different culture and I enjoyed the whole sense of adventure. Ultimately, my father retired from the Air Force in the Pacific Northwest. He really inspired me to pursue a career in military service and I entered the Air Force Academy right after I graduated high school, electing to serve in the Navy.

CVB: Becoming a Navy Seal is physically and emotionally grueling. Around 80% of people who attempt basic training do not pass. So it would take a certain type of person to go through training and withstand the pressure of undertaking a steady flow of very dangerous missions. What is your observation about men you have worked with both as a young Seal and as a commander? What was the policy, if any, during your tenure to protect Seals who were showing signs of emotional distress? What happens when they leave the military?

Rear Adm. Losey: I feel privileged to work with a group of highly motivated and committed young Americans. They understand the risks and rewards of their chosen profession and serve our nation to the utmost of their ability.

Over the last 15 years, and since 9/11, we have gained an increasing understanding of the importance of properly taking care of our prime resource and flagship weapons system – our people. Their physical, emotional, and spiritual wellbeing and that of their families, are critical to retaining and sustaining the hard-earned experience necessary to win. Over time, we have implemented critical initiatives to take care of our warriors. We have institutionalized resilience by routinely measuring and assessing the effectiveness of these initiatives, and share best practices across the U.S. Special Operations Command (USSOCOM). The health and resilience of the force is a key priority and necessity for all USSOCOM components. Service-connected traumatic brain injury (TBI), post-traumatic stress (PTS), and related manifestations like suicide are a reality. The ongoing evolution of our ability to recognize and support our people with effective care both during and after service is a direct reflection of the value placed on their service.

CVB: In June 2016, the U.S. Secretary of the Navy Ray Mabus signed a new separation policy to protect members of the Navy and Marine Corps who have PTS and TBI, the first branch of the military to do so. The Navy’s new separation policy will consider a service member’s mental health as a possible cause of misconduct that may lead to an involuntary separation from the military where previously misconduct alone took precedence.

This is pretty remarkable. Do you think that the Navy has a greater sensitivity to the emotional experiences of their soldiers? Was this something you were involved in during your tenure?

Rear Adm. Losey: It is clear that Secretary Mabus cares deeply for his sailors. The policy that he and the Navy implemented is as necessary as it is progressive. In my time at Naval Special Warfare Command, the Chief of Naval Personnel and I were personally and routinely engaged on cases where sailors with verifiable service-connected challenges were at odds with certain personnel policies that did not enable us to fully address our obligations to take care of our people in a way that was needed. This new policy reflects numerous cases where we sought exceptions in order to take care of our sailors, and now allows commanders to consider and address greater dimensions of service-connected challenges.

CVB: Why did you agree to speak at the Cohen Veterans Care Summit?

Rear Adm. Losey: I have a well-developed interest in advancing the care of both active duty and veteran service members. The summit is a great opportunity to share perspectives and appreciation with all of the communities engaged in this effort.

CVB: What do you hope will come out of the meeting overall?

Rear Adm. Losey: I hope that a better understanding of the challenges and potential positive impacts of this effort are understood, and that an even greater sense of purpose and urgency is fostered from the summit.

CVB: PTSD used to be called shell shock. Do you think there is now a greater understanding among military leadership about PTSD? In your circles, were people discussing the suicide statistics (recently reported to be 20 veterans per day taking their own lives)?

Rear Adm. Losey: I think that there is definitely a greater awareness and prioritization to get to more effective treatment protocols. There are numerous initiatives and policies that speak directly to suicide prevention and support across the services and specifically within USSOCOM. However, it would probably be a stretch to attribute all suicide concerns to TBI, PTS, or purely service-connected matters.

CVB: You selflessly devoted 33 years to the Navy. What were your most memorable experiences?

Rear Adm. Losey: All of my most memorable experiences center on people – working through complex problems, overcoming perceived limitations and obstacles, and demonstrating the power of the human spirit – “what the mind can conceive, the body will achieve.”

CVB: What’s next for you?

Rear Adm. Losey: I am excited about the many possibilities to consider. I can only hope that the next three decades will be as purposeful as the last three.