Under Secretary for Health
United States Department of Veterans Affairs 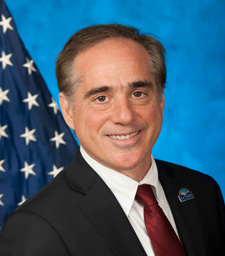 The Honorable Dr. David J. Shulkin is Under Secretary of Health for the United States Department of Veterans Affairs. As the Chief Executive of the Veterans Health Administration, Dr. Shulkin leads the nation’s largest integrated health care system with over 1,700 sites of care, serving 8.76 million Veterans each year. The Veterans Health Administration is also the nation’s largest provider of graduate medical education and major contributor of medical research. Dr. Shulkin will have oversight over the system that employs over 300,000 people who work in the health system.

Prior to being nominated by President Obama and being confirmed by the United States Senate as Under Secretary of Health, Dr. Shulkin served in numerous chief executive roles including serving as President at Morristown Medical Center, Goryeb Children’s Hospital, and Atlantic Rehabilitation Institute, and the Atlantic Health System Accountable Care Organization. Dr. Shulkin also previously served as President and CEO of Beth Israel Medical Center in New York City. Dr. Shulkin has held numerous physician leadership roles including the Chief Medical Officer of the University of Pennsylvania Health System, the Hospital of the University of Pennsylvania, Temple University Hospital, and the Medical College of Pennsylvania Hospital. Dr. Shulkin has also held academic positions including the Chairman of Medicine and Vice Dean at Drexel University School of Medicine. As an entrepreneur, Dr. Shulkin founded and served as the Chairman and CEO of DoctorQuality one of the first consumer orientated sources of information for quality and safety in healthcare.

Dr. Shulkin is a board-certified internist, a fellow of the American College of Physician. He received his medical degree from the Medical College of Pennsylvania, his internship at Yale University School of Medicine, and a residency and Fellowship in General Medicine at the University of Pittsburgh Presbyterian Medical Center. He received advanced training in outcomes research and economics as a Robert Wood Johnson Foundation Clinical Scholar at the University of Pennsylvania.
Over his career Dr. Shulkin has been named as one of the Top 100 Physician Leaders of Hospitals and Health Systems by Becker’s Hospital Review and one of the “50 Most Influential Physician Executives in the Country” by Modern Healthcare and Modern Physician. He has also previously been named, “One Hundred Most Influential People in American Healthcare” by Modern Healthcare.