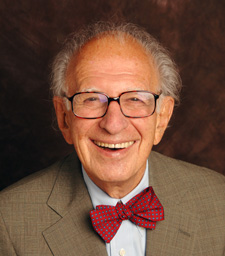 Eric R. Kandel, MD, is a Professor at Columbia University; Kavli Professor and Director at the Kavli Institute for Brain Science; Co-Director at the Mortimer B. Zuckerman Mind Brain Behavior Institute; and an Investigator at the Howard Hughes Medical Institute. A graduate of Harvard College and NYU School of Medicine, Kandel trained in neurobiology at the NIH and in psychiatry at Harvard Medical School. He joined the faculty of the College of Physicians and Surgeons at Columbia University in 1974 as the founding director of the Center for Neurobiology and Behavior. At Columbia, Eric organized the neuroscience curriculum. He is an editor ofPrinciples of Neural Science, the standard textbook in the field now in its 5th edition.

Eric has received 23 honorary degrees, is a member of the US National Academy of Sciences as well as being a Foreign Member of the Royal Society of London and a member of the National Science Academies of Austria, France, Germany and Greece. He has been recognized with the Albert Lasker Award, the Heineken Award of the Netherlands, the Gairdner Award of Canada, the Harvey Prize and the Wolf Prize of Israel, the National Medal of Science USA, and the Nobel Prize for Physiology or Medicine in 2000.